Why Smart Businesses Are Upgrading From Windows XP

On April 8th, 2014, Microsoft will terminate its extended support for the Windows XP operation system. For companies who have migrated from Windows XP to Windows 7 or 8, no disruption will be felt. However, companies who are still using the Windows XP platform will have to face enhanced security risks, increased costs, and user friction. Managers and IT departments should consider an immediate upgrade to either Windows 7 or Windows 8, to avoid these issues.

The Windows XP operating system has been on the market for more than a decade, and users of all types and from every industry enjoyed the benefits that the platform offered. Technology, however, does not remain stagnant, and the improvements rolled out in the Windows 7 operating system made remaining on Windows XP a difficult choice for IT managers. Additionally, the release of Windows 8, with its dramatic shift in the Windows user experience, moved the technological innovations even further away from Windows XP. The result: Windows XP users are using a dated system which costs more to maintain and implement. And in 2014, XP will come with added security risks and support challenges.

Even worse, many XP implementations today are already at huge risk and likely already compromised. Between firms not patching and users commonly having local administrator rights, those systems are probably littered with spyware and viruses.

Making the move to Windows 7 or 8 is the smart choice for everyone – especially law firms and other businesses.

Here are four areas in which the benefits of upgrading Windows 7 or 8 provide a strong case for why it’s time to retire Windows XP.

The termination of extended support for Windows XP means the end of security updates, which leaves your computer vulnerable to viruses and other malware out to harm your machine. Once Windows XP support is terminated, users will not be able to get crucial system updates that repair the holes and issues that users experience. The effects from not switching will not be felt immediately (meaning your system will not crash on April 9th, 2014), however, as time goes on and system updates are not performed by your computer, you move further away from security and safe use. You become vulnerable to system issues and disruptions to productivity that cost you time and money. Upgrading to Windows 7 or Windows 8 will eliminate these problems and should be seriously considered by IT Departments.

New PC’s come with features that are either not supported by or are not fully mature on Windows XP. This includes WiFi and Bluetooth features, enhanced USB ports, high-resolution touch screen, and other touchscreen features. Users who want to take advantage of these technological advancements would have a difficult time doing so if they remain on Window XP.  Additionally, Windows 7 and 8 (especially Windows 8) have a modern user interface with increased attention paid to how the end user interacts with the system. Organizations who are interested in taking advantage of the latest innovations will have a difficult time running these applications smoothly on Windows XP.

The biggest advantages to upgrading to Windows 7 or 8 come in the form of cost savings.  In 2012,  International Data Corporation (IDC) published a report on Why Sticking with Windows XP is a Bad Idea. The report found user productivity costs and IT labor costs of Windows XP to be dramatically higher than the costs of using the newer Windows 7 or Windows 8 systems. The IT labor cost ( for IT teams to fix issues on a defective machine) when using Windows XP jumped from $451 in year two of using the system, to $766 in year five. Add this to the fact that extended support will not exist in 2014 for Windows XP, and costs to fix and maintain Windows XP systems begins to skyrocket. The costs due to loss of user productivity are also at likely to increase for Windows XP. When computers do not operate correctly, employees cannot perform their job, and that downtime costs companies money. This same IDC study found that user productivity costs per PC per year nearly doubled from $177 in year two to $324 in year five. Companies who insist on keeping Windows XP are not only affected by security and user experience issues, but also incur higher maintenance costs to keep machines running smoothly.

The initial costs of upgrading to Windows 7 or 8 are overshadowed by the savings that are incurred over the lifetime of working with the new system. In the figure below, the Return On Investment can be clearly seen — by year 3, the businesses in this study who had upgraded from Windows XP, had begun to see their net savings overtake the investment in Windows 7. 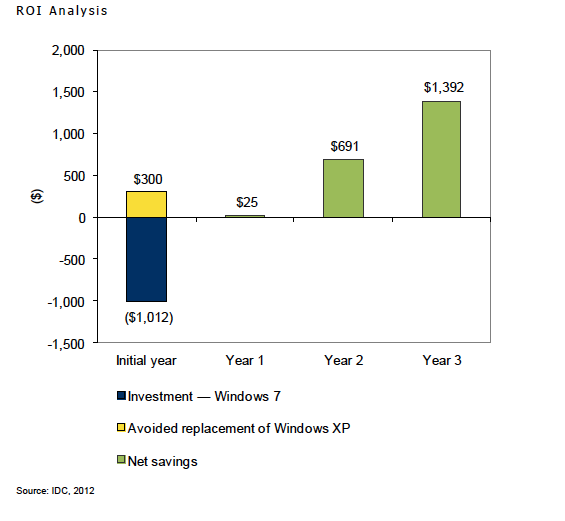 As time goes on, the ROI continues to build in the form of reduced maintenance costs.  Businesses concerned with impacting their bottom line should consider upgrading from Windows XP to Windows 7 or 8.

There are clear benefits to upgrading from Windows XP for either Windows 7 or 8. Managers and IT Departments who are concerned with system security, the satisfaction and efficiency of their employees, or saving money and improving ROI, should definitely consider making the switch.

As Microsoft continues to update and upgrade their systems, businesses relying on outdated Windows XP software (which is now two generations behind Microsoft’s current technology) will not only be at risk, but will also be wasting money that could be used to improve their IT systems.