For the Home Office: Review of the Orbi AC3000 Tri-band WiFi System

Wireless is indispensable in this day and age. Most people can get by with the standard wireless router that is provided by their ISP. However, the convenience of wireless has resulted in over-saturation of wireless channels, leading to weaker signals and spotty connections. There are a multitude of wireless extenders available on the market, but these simply compound the issue of channel saturation and generally don’t work well due to bottlenecking.

Many factors can impact a good wireless signal. Everything from building architecture to competing wireless devices, microwaves, metal, etc. Often you can improve your wireless signal and saturation through your house by simply moving the wireless router to a more centralized location. In some cases, however, you will simply be unable to place your Wireless Access Point in a better location.

This is the situation I recently found myself in. After testing and troubleshooting several different “Wireless Extenders” and attempting to move the router to a more centralized location in my house, I was not able to improve the signal quality in my home office. As such, I knew the only way I could really resolve the issue would be to install a Full-Mesh Wireless System in my home.

After comparing Orbi to Eero and Google WiFi competitors, I chose to go with the Netgear Orbi AC3000 Tri-Band Wireless System. The Orbi is about $100 cheaper than the Eero system and covers the same amount of space with only two Access Points rather than three. It is slightly more expensive ($80) than Google’s WiFi, though the throughput of the ‘Satellite’ Access Point is better. Also, both the ‘Base’ and ‘Satellite’ Orbi Access Points have Ethernet ports readily available (3 on the ‘Base’, 4 on the ‘Satellite’), which is helpful if you have devices that aren’t going to use WiFi but still need internet. 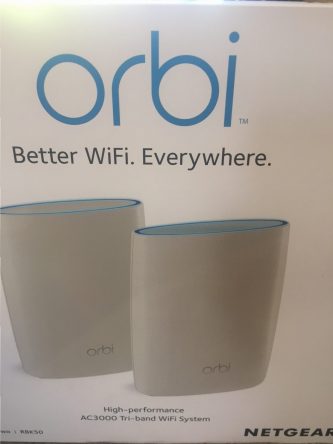 The packaging is very high quality. It gives off a perception that Netgear is investing a lot of time and money in rebranding its product for the better. I must say, they have done a good job. 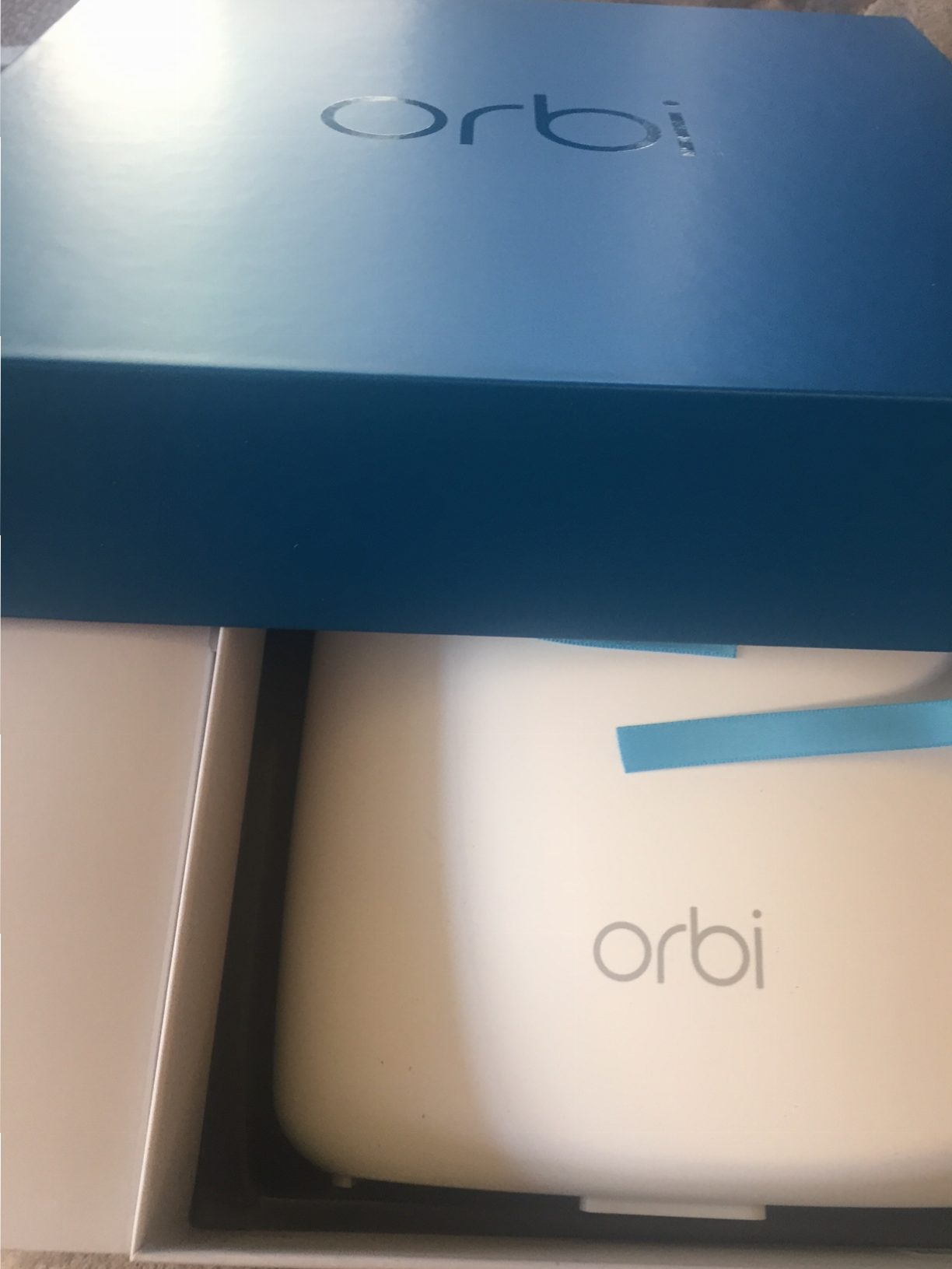 The contents of the box: Base & Satellite units, power adapters, and an Ethernet cable. 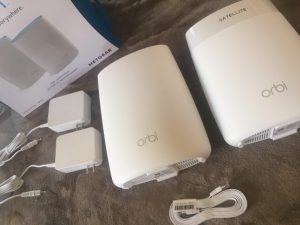 The Base access point is similar to the Satellite, except it has an ‘Internet’ port for connecting to your router or modem. It is possible to connect a USB drive to the USB port and access the storage over your wireless network.

The Satellite has four Ethernet switch ports rather than three. Otherwise they are essentially the same device.

After plugging the Base ‘Internet’ port into your modem, or in this example the router, plug both the Base and Satellite power relatively close to one another for the initial configuration.

The Base will begin broadcasting its own wireless network for setup. In this case, it is ORBI53. Connect to this network and open a web page. I should mention that there is also an app for mobile devices that claims to be easy-to-use. I didn’t use the app so I won’t be covering it in this blog. 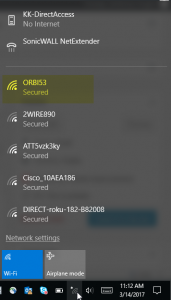 After opening your browser, you will see this welcome splash screen while the Base and Satellite begin to boot up. 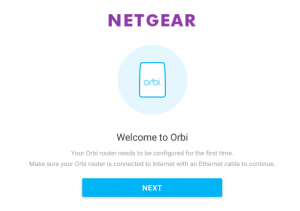 If you have an existing router you are plugging into, like I do, the Orbi system is intelligent enough to detect if the IP addresses will conflict and to change the Orbi system to be compatible automatically. It would be nice if it asked you to enter WAP-mode only, but this is a change you have to make later in the process. 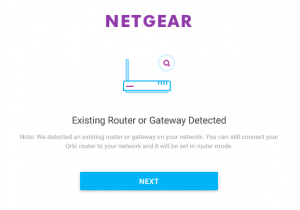 The system advises you of the new Orbi IP address. 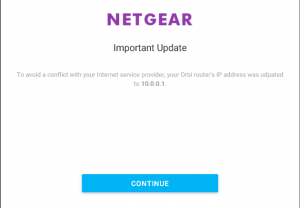 After this initial conflict is resolved the Base begins to connect to the Satellite WAP. 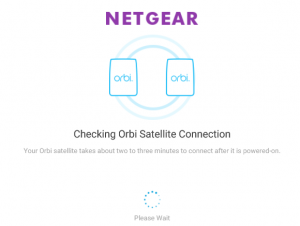 After they have connected to one another, the Base will automatically begin to configure the Satellite. 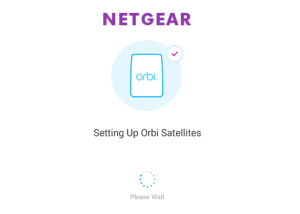 Once the initial sync is complete, the website will prompt for Admin credentials. 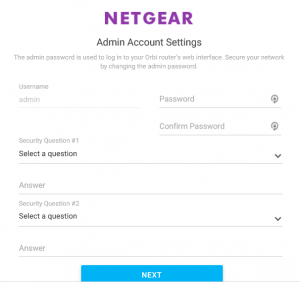 Now, the system auto-updates firmware on the Base and the Satellite.

The firmware release notes are readily available from the Orbi itself, a handy feature. 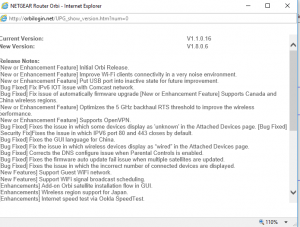 After firmware has updated, you will see a nice confirmation page with your settings. 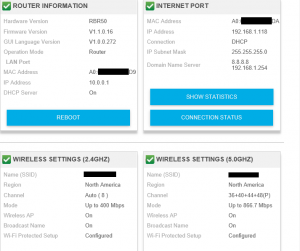 After the initial configuration, it was very easy to log into the Orbi via the previously provided IP (10.0.0.1) and change the system from ‘Router Mode’ to ‘AP Mode’. Essentially this means that my wireless network will not be behind two firewalls and my ISP provided router will continue to dole out DHCP requests (IP addresses). If you have strictly, say, a DSL modem, you might want to keep the Orbi in ‘Router Mode’ so it can handle DHCP, NAT, etc. In this case, after changing the ‘AP Mode’ the wireless system received an IP address from my router and was easily accessible from any of my other home computers. 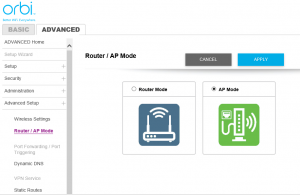 This handy page here shows you the colors that your Orbi system will light up with, depending on its state. It’s nice and easy to understand.

There is also a dashboard that shows you how well your Satellite is doing. In my case, my throughput went from 3Mbps to 35Mbps–a huge increase. 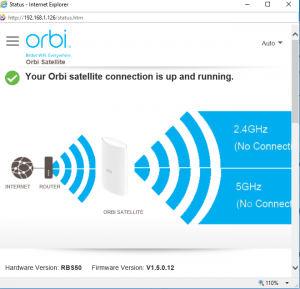 If you have intermittent, spotty, or weak wireless signal in parts of your house and have tried everything else, I recommend checking this product out. It is fairly simple to set up and has been working flawlessly since it was installed. It comes at a high price but can you really put a price tag on having a good wireless signal throughout your home or in your home office?