At the start of the year, Kraft Kennedy moved to a new office space and adopted an open floor plan and flexible seating arrangements. This is a model that more law firms will find viable as they look to lower overhead costs and promote collaboration among mobile attorneys across global offices.

Since the recession of 2008, law firms have found themselves having to make hitherto unimaginable changes as clients push back at legal fees, pointing to the non-legal expenses that appear on their bills. As law fir

ms face mounting pressure to lower costs, some are starting to look for these savings in real estate, the second highest expense for firms following salaries. Among these is the high overhead of maintaining a large and expensive office space, especially in New York City, where many leading firms are located. In light of this new critical approach to office space, together
with the changed nature of legal work brought about by the rise of a mobilized and globalized workforce, a different kind of office plan is starting to gain traction.

The main space at Kraft Kennedy’s new office at 630 Third Avenue does not have any assigned seats or barriers between individual workspaces, which allows floor-to-ceiling light to penetrate the space. Kraft Kennedy team members can choose any seat that they want in the office, provided that it’s not already taken, and leave their things at the workstation overnight if they will be returning the next day. Each person also has an assigned locker.

The office has only a handful of reserved seats, mostly for administrative and executive staff. There are several glass-walled offices and seven conference rooms, which afford privacy and meeting space to those who need it at a given time. Each is equipped with state-of-the-art Lync phones and large-screen TVs for presentations, video conferencing, and movie-watching during
downtime. Many walls in the conference rooms and in other locations on the floor double as “whiteboards” for teams to use as they work on configurations and other solutions for clients. 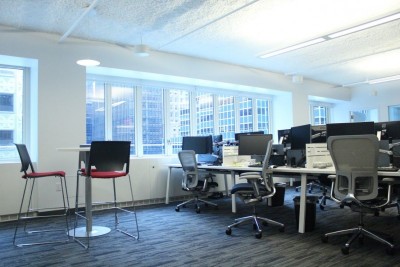 Prior to our own move to the new space, there were concerns about the level of noise in an open uninsulated space and the affect that it would have on our ability to do concentrated work and have phone conversations. To to afford our consultants a sense of privacy and focus, we have introduced white noise into the space. The white noise is noticeable if you listen for it and the conversations of others are indistinct.

While corporations have focused on cutting costs since the eighties, law firms have been slower to abandon traditional spaces, maintaining their large partner offices and closed-off spaces. It is not unusual for a partner’s office to be 200 to 250 sq. feet, dimensions unheard of in other industries, according to architect Todd DeGarmo, of Studios Architecture. While this is still the case for many, some forward-looking firms are adopting new models alongside other concessions to client demand, such as alternative and fixed-fee billing arrangements.

In fact, open-floor seating arrangements support another emerging facet of the practice of law associated with fixed prices: teamwork. Fixed-fee billing arrangements reward efficiency rather than sheer billable hours, meaning that teams increasingly work together as lawyers go to their in-house experts rather than spend time researching. Law firms are increasingly fostering a collaborative atmosphere as cost-conscious clients apprise the quality of a legal team rather than flock to individual star lawyers, the consensus at “Substance Over Status: Justifying Change,”a roundtable on the subject hosted by Gensler. 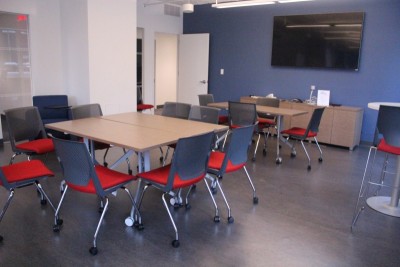 Designing office space with formal and informal collaboration in mind has long been a trend outside of the legal industry. Steve Jobs famously designed the Pixar office and Apple Campus 2 in such a way that employees had to interact with each other frequently, believing that this encouraged networking and brainstorming.

Inner-office networking is also becoming more important as more attorneys go mobile, working from home or from other offices. Firms that have given their attorneys the option of working from home or from other locations especially see a lot of their workforce come into the office sporadically and find that they have less need for dedicated offices.

The Kraft Kennedy office is designed to accommodate such a mobile work lifestyle. Each work station is equipped with a docking station for laptops, dual monitors, and a Lync phone. Lync instant messaging and videoconferencing offers virtual collaboration capabilities that allow us to have no reserved seating while still using traditional phones and keeping the same phone number. Lync also enables voicemail-to-email transcription and other benefits.

Orrick, Herrington & Sutcliffe, a firm of over 2000 people, has moved to an open floor plan that “reflects Orrick’s progressive culture, integrating technological, environmental and social advantages.” Similar to Kraft Kennedy’s space, “Numerous public spaces, transparent glass office fronts and an open floor plan, with low-height components for greater visibility and interaction among staff, contribute to a sense of community. To better connect with other offices and clients, Orrick invested in state-of-the-art telepresence conferencing equipment.” Some law firms have adopted similar plans, and more will in the future, especially as younger talent looks for technologically and sociologically attuned workplaces. Undoubtedly, this model will not work for some firms. It will for many others however, as the legal industry finally starts to reevaluate the way it views its office spaces.