Getting Outlook Meeting Reminders In Focus, Over Other Applications

In Outlook 2003, 2007, and 2010, reminder windows pop up in Outlook, but they do not steal the focus if you are working in another program.  For example, if you currently working in Word or Internet Explorer, you won’t see a reminder window if one pops up, since you’re not in Outlook.

In previous versions of Windows, this wasn’t as big of a deal because you would still see the reminder window in the task bar.  So even though you didn’t see the actual window, you would see the tab for it flashing on the taskbar.

In Windows 7 however, the default grouping of same-application windows, makes is much harder to see when a reminder window pops up. For example, the image below shows a second Outlook window, which is actually a reminder window.

As a result, Windows 7 users may find that they’re more likely to miss reminders and meetings.

The Solution – An Outlook Addin to Bring Reminders to Focus

Kraft Kennedy has created an Outlook addin which responds to the “reminder” event in Outlook, and uses Windows API functions to locate the reminder window and force it into the foreground.

With this addin installed, users would see the reminder window pop up in front of whatever application they are working in, and it will stay in the foreground until the reminder is dismissed or snoozed.

People who may have missed reminders before should now find that it is no longer an issue.

The image below shows a reminder in the foreground, over an Internet Explorer session.

We’re giving this addin away for free to anyone that is interested, but with no support.  If you’re interested in trying it, download the plug-in now. 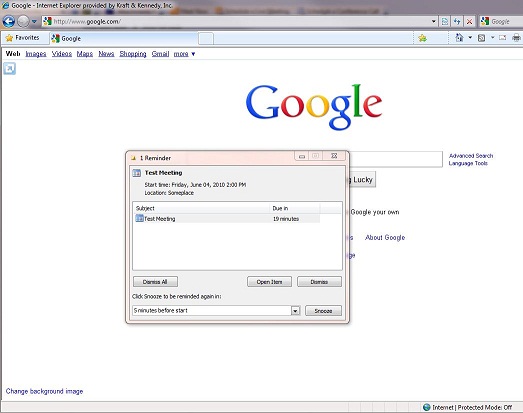 62 thoughts on “Getting Outlook Meeting Reminders In Focus, Over Other Applications”