In terms of configuration, Veeam is running on a dedicated Dell PowerEdge T710. Local backups are saved to a local RAID6 array, then copied to a Tandberg StorageLoader with a HP Ultrium LTO-5 drive. The Tandberg is direct-attached to the T710 via Dell 6 Gbps SAS HBA. 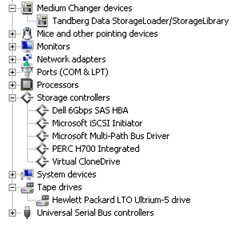 Prior to making the registry change we were seeing ~70MB/s transfer rates to the Tandberg, and Veeam reported “Network” as the bottleneck as described in the blurb above. After making the registry change we began seeing transfer rates above 100MB/s, and noticed that some tapes perform better than others with rates approaching 130MB/s. As you can see below, Veeam now reports “Target” as the bottleneck.