Macs in the Enterprise 2013

A couple of years ago, I wrote an article about my experiences with working on a Mac.  I used a MacBook Air and tested using different configurations between native OS X applications and Windows with virtualization as well as running native Windows with Boot Camp.

Since then, my usage of all things Apple has grown to the point where I am now fully entrenched and I am quickly approaching “Apple fan boy” status. I have decided to go all in, and am now using a 13″ Apple MacBook Pro with Retina display as my primary work machine. Again, I tried some different ways of working with the Mac and I feel that I have finally settled on a configuration that works best for me so I thought that’d I’d share my experiences, good and bad. I currently work with mostly OS X applications, with Windows 8 running as a virtual machine with VMware Fusion. Here’s the breakdown of the applications I use and the reasoning behind them: 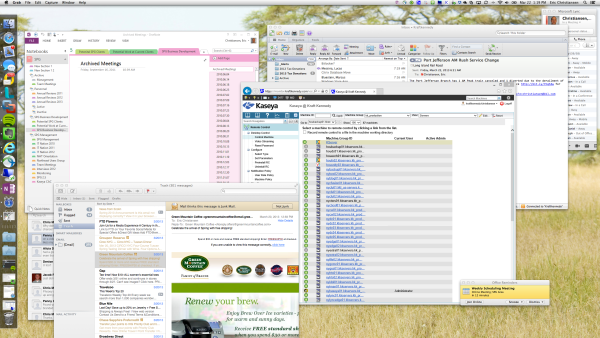 I originally was against using Unity mode because the performance was very poor when moving and resizing windows. With the latest version of VMware Fusion (5.0.3), Unity performance is great so I’ve switched to using that primarily.

Email:
I’m using Microsoft Outlook 2011 for Mac as my primary email application for work.  While the built-in mail application is clean looking and works well, I found that it doesn’t scale well with the amount of email I receive. Performance with Apple’s mail client degraded with a large inbox. I also found that it would not update very frequently, especially when resuming from sleep. I did not use Outlook for Windows on my Windows VM because of the lack of integration with the other OS X applications. Finally, I use the built-in mail application for my personal mail. I am very against having personal and work email accounts accessed from the same application as its all too easy to mix up which account you’re sending from.

Microsoft Lync:
We use Lync very heavily in our organization. We use it for Instant Messaging, presentations, video conferencing, and soon, it will be our primary phone system replacing our Cisco phone system. Microsoft has an OS X version of the Lync client (Lync 2011), which I use primarily. However, there are some cases where I will use the Windows client within my virtual machine. I’ve found that the Lync Mac client is limited and can be buggy from time to time. When I’m doing screen sharing, I’ve found the Mac client does this very poorly so I almost always use the Windows client when I’m presenting. Also, there are certain features like whiteboarding, which don’t work on the Mac client. So, I have both clients installed, but only sign into the Windows client when I need to use it. Here’s what the Lync client for Mac looks like. It’s mostly similar to the Windows version.

Office Suite:
I use Microsoft Office 2011 for Mac when I can. However, not all applications (such as OneNote and Visio) are available. The big catch with this is that we use Autonomy iManage internally for document management. As there is no Mac client for this document management software, I’m forced to use the Windows version and check documents out and in manually. I don’t work on documents too much, so this is not a big deal to me, but for heavy document users, this can be cumbersome.

Web Browser:
I use Safari when at all possible. I used to prefer Google Chrome, but I’ve found Safari to be much more responsive, especially on the Retina Mac. I do use Internet Explorer in my virtual machine for certain sites that use ActiveX controls or don’t render properly in Safari.

There are many other applications that I use. My rule of thumb is that I try and use the Mac version of an application if its available. As Macs become more and more main stream, many software vendors are writing Mac versions of the software. Overall, I’m very happy with using a Mac as my primary work machine. However, its not for everyone. Enjoying a Mac computer at home doesn’t mean that it will be a good fit for work. For the basics like email and web browsing, Macs can be fantastic. Once you start digging into it more and get to the business specific applications that have no OS X version, things start to get more complicated.