In SharePoint 2007, menus in some master pages opened behind page content and Flash animations.  However, there was an easy fix which was to just locate the css style for the dynamic menus, and change the “z-index” property to a high number.  This same fix does not work in 2010 however, and to make matters worse, the menus on the default master page in 2010 always open behind Flash videos.  (The built-in Silverlight web part in 2010 does not have this problem, but I suspect there are still many people who will have home pages with Flash content.)

Here’s an example of how the menus open by default, behind the Flash content. 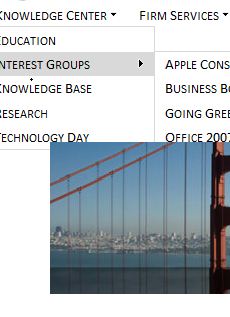 After much digging around, I was able to find a way to correctly display the menus in front of Flash content.  You have to add the following parameters to your actual object html code for the Flash object, to make it transparent.

Add the following parameter to the OBJECT tag:

Add the following parameter to the EMBED tag:

After that the page menus should load correctly, as shown below.