“Hybrid cloud” is a term that has been tossed around for almost as long as cloud computing has been a viable option for enterprises. But while hybrid cloud has been championed as the answer to anyone afraid of going all in with the cloud, it has been somewhat of a unicorn. Until now, Hybrid cloud solutions (like VMware’s vCloud Air, IBM’s BlueMix, Microsoft’s Azure Pack or Amazon’s tools to bridge your on premises environment with AWS) have been disjointed, complex patchwork designs that fail to deliver on the promise of a fluid, consistent experience for workloads, whether they live in your data center, in the public cloud, or span across the two. When the experience is seamless, it is usually so for a small subset of services, and the value it provides for the complexity involved in the deployment is a tough sell.

Microsoft aims to change all of this with the upcoming release of Azure Stack, a private cloud environment that bridges seamlessly to Microsoft’s public cloud, Microsoft Azure. 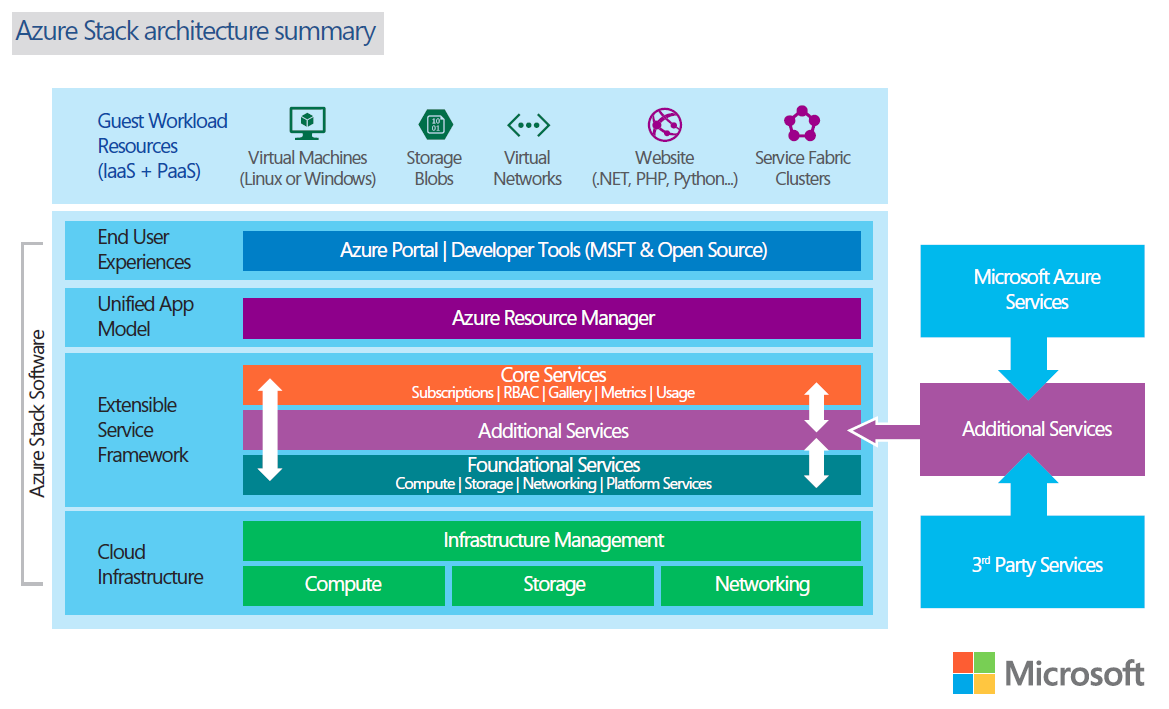 So what is Azure Stack? The most basic explanation is that Azure Stack is an interface layered on top of a tightly engineered, hyperconverged instance of a Hyper-V cluster. But that description doesn’t explain the services that Azure stack makes available to your private cloud.

Of course, given the scale of Microsoft Azure, there will inevitably be features that are not available in Azure Stack. There will likely be some features or services that will require you to connect to the larger public cloud in order to tap into Azure’s vast resources, but you can contain and control your data and workloads to the servers running in your data center. Also, there will be some level of lag in the updates and revisions before they make their way from Azure to Azure Stack.

Providing the resiliency, fault tolerance, flexibility, and elasticity that are the hallmarks of cloud services is not an easy feat. Every component needs to be duplicative and services have to be tightly integrated to ensure smooth and seamless recovery from individual component failures. For that reason, you can not just build your own Azure Stack from components you choose yourself. Azure Stack will likely only ever be available as certified, preconfigured units of hyperconverged infrastructure from a limited number of partners with the Azure Stack software installed.

To understand how Microsoft has squeezed something as big as Azure into your data center, look at the model of Exchange Server and Exchange Online.  While Exchange 2010 was an on-premises application that Microsoft deployed at scale in its cloud for Exchange Online, Exchange 2013 and Exchange 2016 were developed with a cloud-first approach, then packaged for on-premise use. For customers, this represents some advantages as well as a few drawbacks.

The other side of the coin is that there will always either be a lag or an absence of a feature that exists in the on-premise version. This may be because Microsoft wants to retain a value-add for their cloud service, or because a specific feature just does not translate to the lower scale of an on-premise environment. For example, Azure Stack customers should not expect to be able to host their own Data Lake in their own data centers. Another issue is that feature requests and engineering changes are unlikely to get a lot of traction unless they benefit the cloud platform.

However, the part about Azure Stack that is the most attractive to enterprises are those who are looking to leverage a private or hybrid cloud, and this is the very reason why Microsoft created it. It gives you the power of the cloud with the privacy of your own data center. One of the largest obstacles that prevent law firms, or any business from moving to the cloud, is privacy. Businesses want to know who is looking at their data, and put simply, if someone else has those bits, you don’t know who is looking at them.

In a 20-month period ending May 2016, Federal courts have issued more than 3,250 secret orders for data, and more than 450 of those have no end date. This means that the federal government has issued 3,250 blind subpoenas to cloud providers, in which cases the companies who are the subjects of these subpoenas have absolutely no idea that their data is in the hands of the federal government. And by extension, if a company host client data in the cloud, that company’s clients are under the same danger of blind subpoena.

There are still some question marks surrounding what features will be available at General Availability (currently slated for “Mid-Year” 2017), but if Microsoft delivers on it’s promises, you should be able to get the best of both worlds – the ability to leverage public cloud class services for data and workloads that you control in your data center. For some, that may make Azure Stack even better than the real thing.