Things I Use: On My Desk

CTO, lifelong tech enthusiast, and frequent beta tester Marcus Bluestein is discerning when it comes to his tools. The “Things I Use” series will take a look at what Kraft Kennedy’s Chief Technology Officer uses to stay productive. This first installment addresses hardware.

There is, of course, no one arrangement for guaranteed productivity. Everyone has a different style of working with technology and many people tweak their approaches continually. Below is a look at one person’s carefully considered preferences.

Marcus uses a keyboard and mouse even though he uses the Surface for his primary computer, finding a more traditional desktop setup the most comfortable. Like all the desktops at Kraft Kennedy’s non-assigned seats, his has a USB docking station with multiple monitors and a phone connected to Skype for Business. This setup allows staff to seamlessly hook up their laptops anywhere in the office.

Two large monitors provide, according to Marcus, “too much of a productivity gain” to pass up. Together with his laptop screen, that makes three. He finds that any more monitors beyond this point stop increasing productivity. 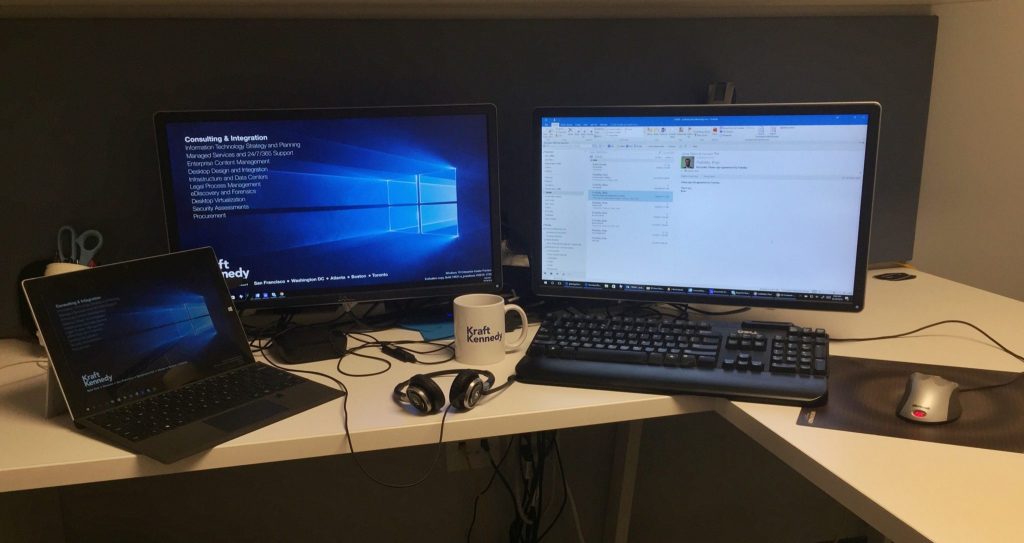 “The i7 doesn’t provide value unless you’re doing a lot of AutoCAD, significant spreadsheet crunching like a financial analyst, or you’re someone who runs a bunch of virtual machines,” Marcus advises. “A typical firm won’t see a return on its investment.”

As for the SSD (solid-state) drive, it is the only option on the Surface. But even on different models, Kraft Kennedy recommends SSDs, which have become more prevalent in the last few years and outclass spinning drives in every way. They are worth the higher price.

“In the office, I take my Surface to meetings,” Marcus says. Taking it out of its dock, he uses it as a laptop, tablet, or notepad. He folds and removes the keyboard, takes out his ‘pen,’ and uses the handwriting feature to make notes or enter information directly into OneNote.

Marcus, however, most often uses the keyboard. “I think better while typing,” Marcus says. “I have been typing since I was 13. Many other people grew up with pen and paper and will feel more comfortable using the Surface like a notepad.”