If you read technology blogs, you’ll read a lot about smart watches.  They’ve really started picking up steam in the past year.  That being said, I don’t know anyone who has one or even noticed anyone wearing one and I ride the subway every day in New York City.  So, I decided to give a smart watch a shot and see if I found it useful or not.

In case you are not aware, a smart watch is a watch that can do much more than tell time.  Most smart watches require a smart phone to pair with for maximum functionality.  I decided on trying out the Pebble and Pebble Steel watches (http://getpebble.com).  We had an original Pebble in the office back when it was a KickStarter project so I decided to try that out before getting the pricier Pebble Steel.  Also, as I use an iPhone and not a Samsung phone, trying out a Galaxy Gear watch wasn’t in the cards for me as not all watches are compatible with all phones. 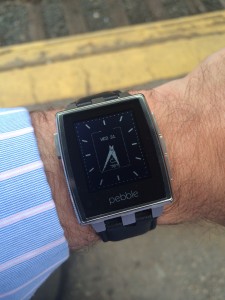 As you can see from the picture above, one of the main reasons why I like the Pebble Steel is that its a nice looking watch that you can wear with dressier clothes.  Many other smart watches look like $10 sport watches you’d use while going for a jog.

Looks aside, the big question I get asked is “What can it do?”.  The answer in reality is not very much, and I like it that way.  I don’t need something that can do everything my phone already does and better.  Can I make phone calls with it?  No.  Can I read through and reply to emails?  No.  Can I surf the web on it?  No.  I don’t want it to do any of those things.  Especially on a screen the size of a watch.

Here’s what the Pebble does do.  It allows me to receive notifications without me having to take my phone out of my pocket.  If I’m in a meeting or walking down the street, I can see why my phone is vibrating.  I often miss my phone vibrating while I’m walking.  I never miss a call now that my wrist vibrates as well.  I get notifications for meetings, text messages and I can even decline incoming phone calls.  It can also be submersed in water unlike most other smart watches out there.  The battery also lasts 5-7 days between charges.  The fancier watches with great looking color touch screens have a short battery life and can’t get terribly wet.  I don’t need that.

Pebble also has its own App Store where you can download tons of different watch faces and programs for the watch.  I enjoy switching around my watch face every once in a while to switch things up.  The apps I use less often as I haven’t found any applications that I liked enough to have me use the watch version over the phone version.  I have the game Asteroids and Pong installed on the phone.  I also have an app that controls my home thermostat.  These are fun to show people what the watch can do, but i hardly ever use them.

So, is owning a smart watch worth it?  I think so.  I treat it as a valuable extension of my phone, though I don’t find it critical.  I won’t be going back if I leave home and forget my watch like I would my phone.  Also, there are some really nice looking watches on the horizon.  Android Wear is a new watch operating system designed by Google so we’ll see many watches that use that in the future.  Finally, there’s always the rumored Apple iWatch which I’m sure will materialize eventually.