Seamless Applications with XenApp and Macs using the 11.0 plug-in

Macs continue to gain traction in the personal computing space.  This in turn has required Windows administrators to become more familiar with Macs and the limitations they may have when connecting to a typical corporate Windows environment.  In the past, Citrix has done an OK job providing Mac support for XenApp through a basic ICA client.  Specifically, they created a functional no-frills client that supports the latest, as well as past, Mac Operating Systems.  The client primarily supported ICA connections through an ICA file.  The Program Neighborhood Agent functionality did not exist and published applications (not desktops) launched through Citrix Web Interface were presented in a kludgy window.  This changes with the release of the 11.0 plug-in (formally called client).

Primarily, the 11.0 plug-in finally enables seamless functionality of published applications on Macs.  Seamless published applications (opposed from the desktop) present themselves to the user as if they are running locally.  This in turn allows the user to run published and local applications side-by-side for an improved experience.  More importantly, this seamless functionality opens the door for corporate environments who serve applications through the Program Neighborhood Agent or Citrix Web Interface to give Mac clients a user experience that is in line with what Windows clients have supported for years.

Also included in this update is the introduction of Citrix’s Dazzle interface.  It looks like Citrix has larger plans for Dazzle suite, but from a client perspective, applications served through the Program Neighborhood website are presented in an iTunes like interface.  I think the logic Citrix is following is that users would be acclimated easily to an application delivery interface that mimics iTunes on the assumption that most users are already familiar with iTunes. The interface is clean, intuitive and even gives the user the ability to add the application to the OS X dock. The “Add” function threw an error for me when I was testing testing the client , but in theory it *should* work.  I’ll post the fix when I come across it, but this bug doesn’t takeaway from the huge functionality upgrade in this client.

It is unfortunate Citrix took years to finally give Macs the same support that the Windows client has had for years, but better late then never, right?  Download it here.

Dazzle interface of the 11.0 Mac plug-in: 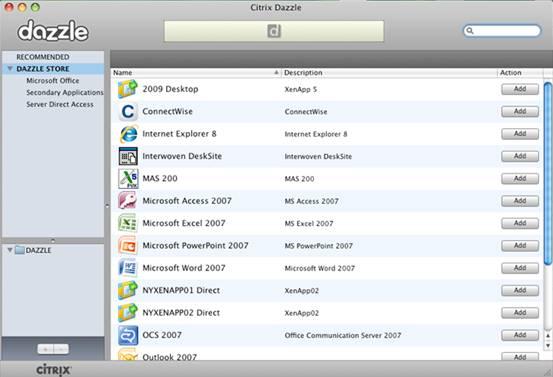