Race to the Cloud: the State of the Legal DMS Market

Note: The article below, written by Brian Podolsky, originally appeared in March 2017 Issue #17 of Legal IT Today. It is reprinted here with permission. Please visit Legal IT Today to subscribe and read more from the legal technology community.

The DMS industry is dynamic. Sometimes the change is linear, as when popular products add new functionality. In 2016, we saw major advancements from the market leaders. iManage introduced a new responsive web interface, while NetDocuments further solidified its integrations with Microsoft Office 365 and Azure. Worldox expanded its cloud platform to the UK and announced a major integration with Workshare.

Sometimes change is exponential. The recent rising market share of NetDocuments comes to mind. Other times the long shift ends up being circular: think of saving to folder structures before the DMS, then saving to profile cards, and now saving to matter centric structures. With this in mind, let’s see how the market is taking shape.

iManage quickly reinvented itself after its split from HP. Newly unrestrained from its former parent company, iManage put major investments into R&D as well as customer support. The result was that in 2016, project ‘White Rabbit’ was morphing from vaporware to actual software. With the release of iManage Work 10, it’s here as the New Professional, or Work 10 for Office. The new interface is fast, responsive, and intuitive. The document timeline feature exposes the vast history of a document that’s often been covered in dust within the database. The new and separate Threat Manager product goes a step further, using all the historical data within the database to develop behavioral baselines for each user. With an eye on current activities, Threat Manager only learns, but will also notify an administrator of any anomalies within the system. 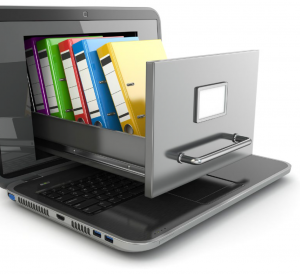 new interface work for everyone? Probably not (at least for this initial release), so iManage still provides the classic FileSite interface. Since this is the first release of Work 10 for Office, I expect there to be a few bumps in the road and limits to customization. As with other DMS products, I expect to see improvements and further enhancements later in 2017.

Although iManage Work 10 can be implemented on-premise, it is meant to be used via the software as a service model. The new responsive web interface requires an additional server to render document previews. The recommended specifications for this server are frankly shocking and may cause small to mid-size firms to take another look at the cloud. Under the hood, the iManage 10 Cloud has been rebuilt as a true cloud platform. It is no longer just a hosted set of dedicated WorkSite and IDOL servers in a data center. It is a multi-tenant, secure cloud platform that uses Lucene’s Elasticsearch technology. That’s right, no more IDOL in the iManage Cloud. When will we see the last of IDOL in the on-premise release?

I’m not referring to product version numbers but to the iteration of the company itself. NetDocuments 1.0 came out of the ashes of SoftSolutions in 1999. A cloud-only DMS, ahead of its time when
it began, NetDocuments 1.0 had its customers but never really caught on. Three years ago, a large capital investment allowed the company to vastly improve its data center infrastructure storage,
security, performance, and reliability. Combined with the introduction of direct integration into Microsoft Office with ndOffice, these improvements spawned NetDocuments 2.0. This is the company that has seen incredible growth across the legal sector. It may not have directly inspired iManage’s focus on the cloud, but it made its competitor aware that it needed a truly modern cloud platform to compete in this space.

Now we have NetDocuments 3.0. So far this year, the company has already announced an additional level of its SOC 2 certifications known as SOC 2+, as well as ndFlexStore, which allows customers to hold certain content in any local or private data center. These advancements continue NetDocuments’ effort to break down all the roadblocks that have traditionally prevented law
firms from adopting the cloud.

On 2 March 2017, NetDocuments announced a new investor, the $3bn private equity group Clearlake Capital, which is purchasing the stock of NetDocuments’ previous investor. Unlike other DMS vendors who have been bought and sold in the last decade, the current NetDocuments management team will continue to run the company and maintain significant ownership.

With more resources and a focus on additional R&D and potential acquisitions to broaden the functionality of their product, there is significant reason to be excited about what’s in store. Expect more advanced integration with Office 365, a revamped workspace interface, enhanced collaboration, and new encryption at the bit-string level of the search engine. One item I am particularly interested in is the integration with Microsoft Flow, allowing for document and matter workflows leveraging Office 365.

There haven’t been any new Worldox versions since GX4 was released in late 2015. That doesn’t mean the company has been sitting idly by. Worldox engineers have been hard at work
expanding its cloud platform to the UK and developing several major new technological initiatives. The first is a collaborative product called Worldox Connect, powered by Workshare.

Worldox Connect allows professionals to securely access and collaborate on Worldox files while on the move or using mobile devices. The second major innovation is the redesign of the Worldox Indexer as a Windows service. Consumers have wanted this functionality for years and it is now becoming available with performance and management improvements. Lastly, Worldox will be rolling out new functionality that will encrypt the entire document repository. This will ensure that the only application that can decrypt and read documents on the file server will be the Worldox client itself. Look out for these advancements in 2017.

Currently, there are no plans for a Worldox GX5 release. As Worldox can easily be upgraded, GX4 may be the last version released, just as Windows 10 will be the last version of Windows.
New features, rollups and functionality will be added, and they will likely receive technical or branded names (think ‘Windows 10 Creators Update’), but it’s still Windows 10. Perhaps the GX4 platform will be rebranded with that type of upgrade model, or remain as it is.

Finally, any review of the DMS landscape must include Microsoft’s Matter Center. After all, legal technology is Microsoft’s world – we are just living in it. While Matter Center itself has been essentially open-sourced and made available on GitHub before it was ever finished, third-party integrators have taken it across the finish line.

Epona’s DMSforLegal is, in my opinion, the best of the bunch. DMSforLegal has been a standalone add-in for SharePoint for several years. But now, with the newly developed Matter Center for creating and managing clients and matters, Epona has integrated with Office 365 to provide a true DMS in the Microsoft Cloud. The product demos beautifully and integrates almost so seamlessly into Outlook that you’d think Microsoft wrote it. The company already has a foothold in Europe and is currently gaining traction in North America. I expect more market penetration in the small to mid-size law firm areas throughout 2017. A key indicator of how the upcoming roadmaps are faring will come in the run-up to ILTACON in August. Will there be hints of major releases? Or will there just be press releases citing cloud-adoption growth and new customers?