Personal Hotspot with iOS 4.3 and AT&T

Over the past few weeks I’ve had the chance to try out tethering – or Personal Hotspot – on my iPhone 4 and AT&T.  This was a new feature available in iOS 4.3 and I wanted to see how it compared to the Sprint MiFi card I used to use.

After upgrading the OS, enabling this feature was very simple.  I chose to turn it on using AT&T’s website which now had two ‘Bundled Features’ that included tethering.  4GB for iPhone Enterprise for $60/mo or 4GB for iPhone at $45/mo.

One thing of note is the fact that after I changed my plan, I lost the ability to go back to the ‘grandfathered’ unlimited data plan.  This may be a small concern for some users who might exceed the 4GB (2GB non-tethering plan) limit.

Once enabled, my iPhone now included a Personal Hotspot section under Settings where I can turn it on and set a WiFi password.  It offers three methods of tethering including USB, Bluetooth, and WiFi with each of these methods activated when I turn on Personal Hotspot depending on what is enabled and what I want to use.  While it allows for up to five connections it does differ from the MiFi card by only allowing three WiFi connections at once.  You have to round out the five connections with either one USB connection or up to three Bluetooth connections. 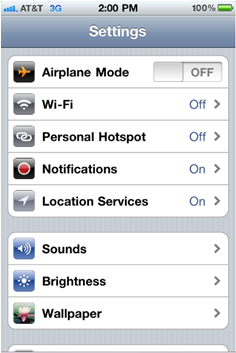 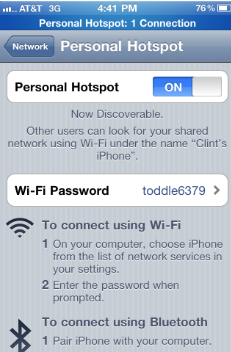 Now for the experience.  My typical usage was a trip from Grand Central to White Plains via Metro North along with the usual ‘no WiFi’ locations I found myself in.  The first thing I noticed was that while sitting on a train in Grand Central, waiting for it to depart, I could now tether.  This was not possible with my old Sprint MiFi card.  Understood that’s more of a function of Sprint vs. AT&T, but still huge.

I also noticed that not only was the speed much faster, the connection dropped less while commuting to and from White Plains.  There were times where my Sprint device would have outages between two stops along the route almost every time.  This didn’t happen with AT&T.  And while there were the typical ‘I have five bars why is nothing working’ instances with Hotspot, it seemed to be pretty stable once a connection was made.

Overall I am happy with the experience.  It’s one less device I need to carry and all in all an upgrade in connectivity, as well as speed, moving from Sprint to AT&T.