The Break-Even Point: Which Version Should You Get?

We performed a break-even analysis to help you decide which version of Windows Server will get the most for your investment and found that the break-even point is twelve VMs per server. But if you plan on running more than 12 VMs, purchase Windows Server Datacenter Edition. (We recommend consolidation of all your server VMs to one or two servers rather than running multiple servers. 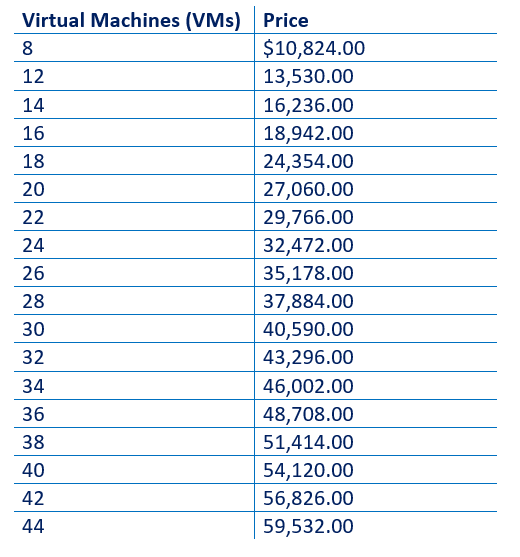 This not only saves you on licensing, but also on cooling.)

If you are currently on Windows Server 2012 with active SA, then you are covered no matter the number of cores. You should be able to convert your Windows Server 2012 license into a Windows Server 2016 license that will cover all the cores on your server, whether you have 16 or 48. To do so you will need to reach out to the VLSC team and have them assist with the license conversion. If you have any issues, please reach out to anyone at Kraft Kennedy and we would be more than happy to walk you through the process or do it on your behalf.

When your current Microsoft Server Software Assurance agreement is up for renewal, specify the number of cores you need to renew. Failure to do so may mean you will need to purchase new licenses and Software Assurance to cover the difference in core count.

As an addendum, whether you are designing new infrastructure or just upgrading software on an old one, you should always purchase Software Assurance with any Microsoft Licenses and maintain active Software Assurance. Microsoft software releases have been more and more frequent, with new feature sets and security improvements. This is an inexpensive insurance against sudden Microsoft price hikes and licensing program changes.

Gone are the days of six-to-eight year upgrade cycles. We are now seeing more organizations move to a two-year upgrade cycle in which old software and servers are repurposed as backups while newer, more robust systems are introduced without major disruptions for their users.

Reach out to Kraft Kennedy today to help you design a future-proofed environment that takes into account not just the current needs of your company but future needs.