The next version of Microsoft’s enterprise messaging platform, Microsoft Exchange Server 2010, is due for release in the fourth quarter of 2009.  The current version of Exchange, Exchange 2007, introduced dramatic architectural changes that made it a compelling upgrade both for law firms running previous versions of Exchange, such as Exchange 2000 or 2003, and those running alternative messaging platforms, such as Lotus Domino and Novell GroupWise.  A native 64-bit architecture, granular server roles, robust native high availability and disaster recovery capabilities, and a 70% reduction in the I/O requirements for the underlying storage combined to make Exchange 2007 an attractive messaging platform for firms of all sizes.  However, given these new features, more careful planning for design and deployment of Exchange 2007 was required than with previous versions of Exchange.

Exchange 2010 presents yet more dramatic architectural changes that make Exchange more robust and flexible for firms of all sizes but, again, require very careful planning to ensure a successful deployment and seamless transition or migration.  In this three-part blog post, I will discuss a few of the key new features that have specific relevance to the legal industry, at a high level.  In future blog posts, I will discuss, at a more technical level, the specifics of these features in addition to others that are not necessarily specific to the legal industry.

While previous versions of Exchange could handle, theoretically, mailboxes of unlimited size, significant investments in memory and a robust storage infrastructure were required to make this a reality.  In addition, Microsoft Outlook 2007 pre-SP2 and earlier client software, in Cached Mode, saw significant and noticeable performance degradation when mailboxes grew beyond 2 GB in size or when individual folders contained more than 5,000 items.  Specific errors may be encountered as mailboxes approach 20 GB in size.  Outlook 2007 SP2 included a fundamental change in how the software handled large mailboxes so that it could efficiently support mailboxes upward of 10 GB or more in size and folders containing 10,000 to 50,000 items.  While these improvements were helpful, law firms generally have significantly larger mailboxes than what Microsoft projects for best practices.

Exchange 2010 reduces the I/O requirements of the underlying storage by another 70% over Exchange 2007, for a total of a 90% reduction over Exchange 2003.  This results in an optimization for mailboxes over 10 GB in size and folders with 100,000 items.  In addition, due to fundamental changes in Exchange’s ESE database technology, Microsoft now supports and recommends deploying Exchange on lower-cost, Tier 2 storage (such as SATA or JBOD).  This can represent a significant cost savings for firms of all sizes and can allow firms to again size Exchange for capacity instead of performance. 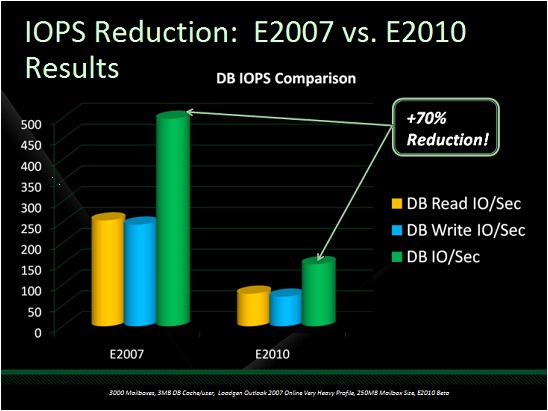 With Exchange 2010, Microsoft has finally introduced basic archiving features natively within the product.  While third-party options such as Symantec Enterprise Vault, Autonomy/ZANTAZ EAS, and Mimosa NearPoint provide a much more robust feature set, the native features may be enough to provide for basic mailbox management for significantly less cost.  Essentially, the native archiving features of Exchange 2010 allow an administrator to create a secondary, archive mailbox for each user to which content can be moved automatically via back-end policies or proactively by end-users.

While each firm should perform a detailed analysis of their needs prior to choosing a solution, a few caveats about Microsoft’s native offering can be found below.

While there are certainly a number of significant caveats, the native offering does provide basic archiving functionality along with a unified search that queries both the primary, live mailbox and the archive mailbox simultaneously.  In addition, there is no additional software to install, as the archive mailbox is accessible natively by both Outlook 2010 and Outlook Web Access 2010.

In Part 2 of this blog post, I will discuss native electronic discovery features, retention policies, and legal holds.