For several years now, I have been very impressed with the eDOCS roadmap presented by OpenText. They have worked consistently with Microsoft in order to develop eDOCS code while new Microsoft versions are still in beta. This allowed OpenText to add deeply integrated support for Office 2010 shortly after its official release a few years ago, and they’ve recently added support for Windows 8 in a very cool way.

In addition to the standard DM 5.3.1 client that runs on the Windows 8 desktop, OpenText also released a free Windows 8 App for the Modern UI. The eDOCS DM App is written with the touchscreen in mind.  Icons are large, and you can tap to search and open documents and browse recent folders. 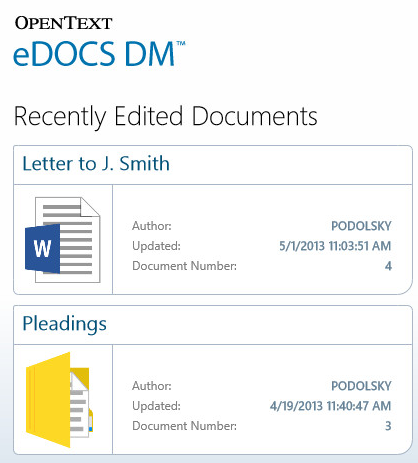 When launching the App, you are shown your recently edited documents, as well as recently accessed folders. Tapping a folder will let you browse it’s contents, and you can easily tap the back button to return to the home screen. Items are shown in tiles, with the most important metadata shown: document name, author, edited date, and document number. I like how it doesn’t clutter up the screen with non-essential information. You can also sort these tiles by any of those metadata values.

Tapping a document will bring up the Windows 8 Desktop and automatically launch the selected document in Microsoft Word for editing. (Note: at the time of this article’s publication, Office 2013 is not yet supported.)

Searching is done via the default Modern UI search interface. Results are shown in a similar manner to the main Recently Edited Documents interface. Results can be sorted by metadata values, and a simple tap will launch the document.

The interface allows DM users to access their content easily from Surface tablets and Windows 8 desktop computers, while still being able to take advantage of the Modern UI. This is way ahead of OpenText’s competitors, and it’s refreshing to see a legal technology vendor embrace the consumerization of IT. People are going to start using Windows 8. Let’s make it useful for them!