Beginning with XenDesktop 4, Citrix did away with concurrent user licensing and implemented per user/device instead. With this model you may find it necessary to enumerate licenses in use, or to free up licenses as users turn over. This post describes how to use the UDADMIN tool to accomplish these tasks.

The Licensing display in Desktop Studio indicates that usage is nearing the maximum number of available licenses:

This is confirmed in the License Administration Console, which shows 133 of 137 licenses in use:

Note that Desktop Studio shows 125 licenses while the License Administration Console shows 137. This is due to Citrix providing a 10% “overdraft” allowance to facilitate connectivity as usage grows. If you’re in overdraft territory it’s recommended that you evaluate whether additional licenses should be added to ensure all users/devices are properly licensed. Since we’re in overdraft territory, we’ll take a look at enumerating licenses in use and freeing up those that should be returned to the pool.

Enumerating and Freeing Up Licenses

A list of users is returned. Note that if device licenses were consumed they would also be listed. 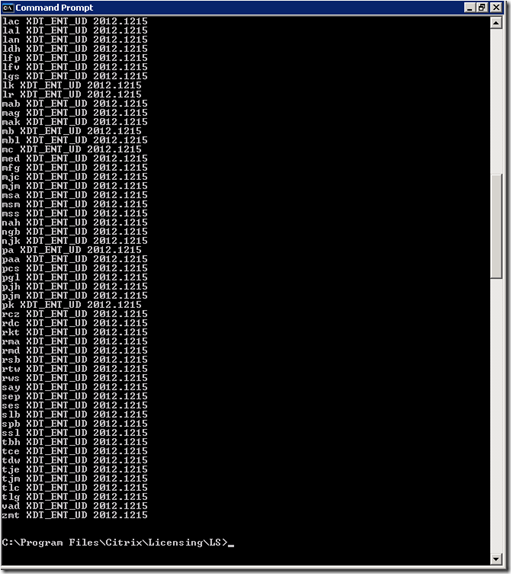 Note that if udadmin -list had shown devices in use, they could similarly be removed via the following command: udadmin -f XDT_ENT_UD -device [devicename] -delete

The Citrix License Server refreshes information every 15 minutes. To force an update you can restart the Citrix Licensing Service or simply wait it out. In either case a subsequent run of udadmin -list confirms that kkadmin is removed:

Corresponding changes are seen upon refreshing the License Administration Console (the count is decremented) and the Licensing display in Desktop Studio (the red line is slightly smaller):

Using this methodology we can continue to free up licenses until the desired number are available.