Last week, I installed the Citrix XenClient on a test laptop and got a chance to play around with it further.   To recap, this is Citrix’s Type 1 client side hypervisor to solve the offline VDI problem that currently exists for XenDesktop.  I posted six months ago when the product was announced at Synergy, but last month Citrix released the 1.0 version of the product, so I figured I would give it a whirl.

First and foremost, XenClient has a very strict HCL.  It is specific to the most modern Dell, HP and Lenovo’s business series laptops with Intel Graphics.  This isn’t a surprise and is actually expected to some degree.  I know that Citrix is working closely with OEMs and Intel for compatibility, so this will expand as the product matures and if it finds a niche.  I was working with a test Dell Latitude E4300 as my XenClient laptop and was able to complete the install within 10 minutes.  It was very straightforward and went without a hitch.  The hypervisor takes about a minute to boot up and then you are presented with the main GUI (screenshot below).  The UI is pretty straightforward, and includes functional information like remaining battery life, gives the ability to connect to different wireless networks, and configuring some basic hypervisor’s properties.

Using the wizard driven menu, I created a Windows 7 desktop and that is what was presented at the center of the screen. 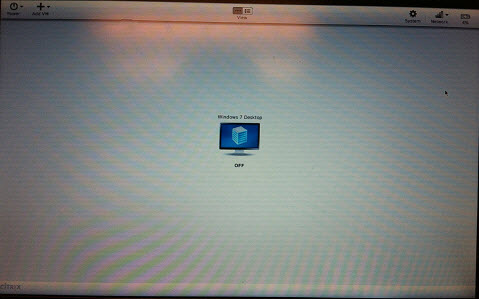 After Windows 7 was installed in a VM, I installed the XenTools, but still had an issue with audio playback.  This was resolved easily by installing the Realtek AC97 audio driver.  My test laptop only had 2 GB of RAM on it and although the hypervisor was utilizing 600+ MB of RAM, the 1 GB Windows 7 desktop ran pretty well.  I confirmed the hardware audio buttons worked and functions passed through to the VM and USB devices such as iPhones and aircards were also passed through without error.  Also, because the XenClient supports paravirtualization, it is able to directly pass through the Intel video card to the running VM.  This means Aero support, HD video playback among other functions that require video acceleration.  Check out the screenshot from the running VM.  The Intel GMA graphics driver is passed through into the virtual machine. 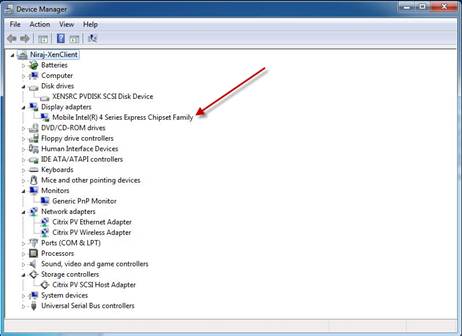 Finally, there is the “Synchronizer” piece that is the server backend that the XenClient can connect to.  It allows deploying, updating and managing virtual machine images centrally against connected XenClient hosts.  The Synchronizer Virtual Appliance only supports XenServer at the moment, so it has been a non-starter for me and expect it will be in most other environments as well.  It is rumored that a virtual appliance that supports ESX is slated for release later this year, so that should help make it easier to test.  I’ll do more testing when this is made available.