These, as well as a full list of resolved issues and enhancements, can be found in more detail in the “WorkSite Indexer Release Notes (8.5 SP2)” on Autonomy’s support website.  We’ve been excited to get our hands on the new releases and have been working on deploying them over the past few days.  The WorkSite Indexer has thus far been deploying without any trouble.

The Universal Search server, on the other hand, has proven to be a little more difficult.  We’ve discovered a bug (confirmed by Autonomy) with deploying multiple WorkSite content engines that causes the deployment process to stop with the message “null” followed by “Deployment process incomplete”, as shown below: 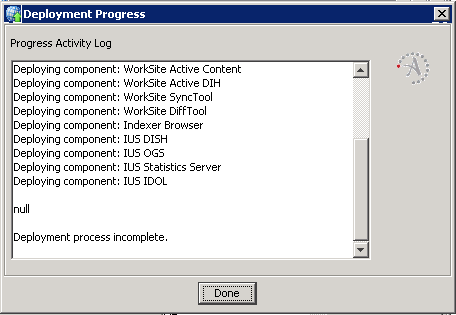 Short of attempting to deploy with 1 WorkSite content engine and creating the additional content engines manually, this brings the deployment of IUS 8.5 SP2 to a screeching halt.  Autonomy has identified this as a high priority issue and expects to have a resolution out in the very near future.  We’ll be keeping our eyes out for the updated release, and will provide a more in-depth review as we spend some time with the new features.  Stay tuned…